Dramatic Storms Give Rain to Soothe The Earth

FSR 437 – a Source of Sediment to Hayden Lake

This is Day 2 of the 10-part series, 10 Days in the Watershed.  While most of these 10 days took place in November, 2018, their stories emerge over time, as so many good stories do.  In October and November of this year, the watershed received 5.67 inches of rain. This story is the unexpected journey of the rain through our watershed.
Read other stories from 10 Days in the Watershed.

Early in November, from the dock at Honeysuckle Beach, I watched a storm roll in from the north, cross the bay, and pass on southward to water other lands. It was dramatic!

I was witnessing one of those fall rains that I understood wouldn’t result in runoff. The ground was still too dry from the long hot summer. Even though the rain came fast and hard, like buckets from the sky, the thirsty ground would soak it up and hold it in place. 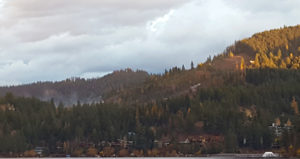 I took a purposeful look up at the Canfield clear-cut.  I tried to imagine myself as a bucket of water, falling on the exposed terrain where trees used to stand. Vegetation covers its earth, though low to the ground and more sparse than before. The soil is soft and spongy, and it’s not so dry that it’s hydrophobic. The rough surface and plant life get in the way of most surface movement of water. It hangs out where it lands long enough to soak into the soil and for plant roots to take it up into their stems and leaves. There are slash piles, burning on that day, that catch and divert any water molecules that gang up, overpower the sticky earth, and attempt to flow downhill.  Everything and everyone is safe from runoff from the Canfield clear-cut this fall.

Farther up in the watershed, the same story unfolds. The lovely seasonal rains wet the humus that has built up from generations of living and dying vegetation. Their decay softens the earth and feeds that plant life. Runoff is stopped in its tracks.

Between the Rain and the Lake

But everywhere that water infiltrates the soil, it is still drawn downhill, albeit underground, by gravity. That means that water moves below the surface. When looked at closely, its pathway appears chaotic. It’s diverted by impermeable rocks or patches of clay, and either coaxed along or stopped and held tightly by capillary forces; but ever-pulled downward by the untiring force of gravity. As water molecules accumulate in the pore spaces, saturating those places between grains of sand, silt, or clay, their interplay overcomes the water’s attraction to the soil particles, and subsurface flow accelerates. 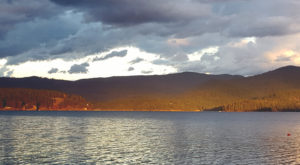 “Some water that infiltrates will remain in the shallow soil layer, where it will gradually move vertically and horizontally through the soil and subsurface material. Some of the water may infiltrate deeper, recharging groundwater aquifers.” https://water.usgs.gov/edu/watercycleinfiltration.html

In those granite mountains, north and east of Hayden Lake, infiltrating water will encounter impermeable rock from ancient eras before reaching an aquifer. It will slide down the buried slopes to emerge as seeps or springs, feeding the creeks that feed the lake year-round.

The Water Cycle in Our Watershed

This – the falling rain, infiltrating, flowing through the ground, emerging to join a stream or Hayden Lake – is part of the water cycle in our watershed. It takes a good deal of time to move through it. On that rainy day in November, I looked at the rain pelting the slopes across the bay and imagined. “I am the rain, falling like buckets. The earth is dark and damp and the journey is slow. But I’ll see you, rain, in the lake …. on another day.”

PrevPreviousFriends, History, and the Dike Shore
NextAre You Ready to Serve on the HLWID Board?Next

FSR 437 – a Source of Sediment to Hayden Lake