The elevation of Hayden Lake, like other small lakes in North Idaho, is not managed. There are no dams on the streams that feed the lake, no gates open or close to control storage levels. There are also no controls on the out-flow. The lake elevation is entirely subject to Mother Nature and human usage.

Water leaves the lake year-round as it percolates into the Rathdrum Prairie Aquifer along the lake’s southwestern reach.  According to the 2015 edition of the Spokane Valley Rathdrum Prairie Aquifer Atlas (1), 45 million gallons (mgd) or 138 acre-feet What is an Acre-Foot?
One football field (minus the end zones), is about one acre in size. A pond the size of a football field, filled to a depth of one foot, would hold one acre-foot of water.
Not comfortable with acre-feet? Check out an online converter(4) to change to any other volume units.leave the lake and seep into the aquifer every day! That’s more than Lake Pend Orielle’s 43 mgd and about half of Coeur d’Alene Lake’s 89 mgd.

In the spring, when the lake elevation rises above the OHWM, lake water flows over the spillway at its southwestern tip into the neighboring field. This out-flow is wholly dependent on winter precipitation and spring weather. It runs from days to months each spring and stops by the time summer is in full swing.

In the hot, dry months of the year, water also leaves the lake by evaporation from its surface.  In those same months, residents along the shore pump lake water for irrigation and personal residential use. History tells of several irrigation districts drawing water from the lake. Dalton Irrigation District is the only one that remains, drawing lake water when they cannot meet demand via other sources.

In the late fall and early winter, the water level is so far below the spillway that you can’t imagine it reaching that height again. This is when outflows are minimal.  Evaporation is low since the temperature is low, the air is humid, and the wind is inconsistent. The shoreline is still populated primarily by seasonal residents who have abandoned the North Idaho cold for the winter, and irrigation systems are offline for the season. Thus, the human draw from the lake is at its lowest for the year.  The most significant outflow that remains is the transfer of water into the aquifer. We can speculate that even that has declined to some degree due to the low level of the lake.  (The flowrate is affected by the weight of the water and by the area of the interface between the lake and the aquifer.)

Water comes into Hayden Lake from streams that carry runoff from the surrounding watershed. Most notably, Hayden Creek and Mokins Creek run year-round (2).  A study conducted by Eastern Washington University in 1985 determined that runoff from streams added roughly 8% to the lake’s average 362,000 acre-feet volume (3).

The lake also receives runoff directly from the slopes and springs adjacent to the lake, and rain and snow that fall on the lake. The average precipitation from 2008-2018 was 17.62 in/yr. This input added to the lake volume by about 1.84 acre-feet per year. This contribution is small in comparison to that of runoff from the watershed. 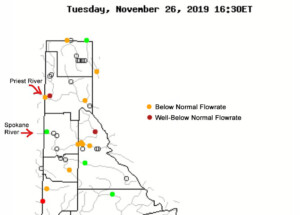 When rain falls in the watershed in the autumn, it will first soak into the soil that has been dry and thirsty throughout the rain-free summer season. Once the soil is saturated, precipitation will run off the land and into the local waterways. While, according to the Coeur d’Alene Press, we have had “normal” or above precipitation in the lowlands, the upper watershed appears to be dry. Current streamflows in the rivers outside the Hayden Lake Watershed but within our watershed’s weather system are below or severely below normal.  We don’t have direct measurements of Hayden Creek and Mokins Creek flows, but we can assume that they are below normal as well.

A Balance of Inflow and Outflow

Hayden Lake’s elevation, at any point in time, marks the balance between inflow and outflow. Today, its inflows are negligible, not having recovered from the summer dry in spite of fall precipitation. Its outflows are reduced but continue, dominated by the ever-present link between the lake and the aquifer.  Not surprisingly, these factors perpetuate the Annual Sinking of the Lake.

References - find more on the web: