English Point – a Cherished Resource in Need of Management

The English Point trail system runs on roughly 300 acres of public land managed by the U.S. Forest Service.  Many residents and many more visitors to the Hayden Lake Watershed frequent the locale; they value the exposure to nature that it offers and its proximity to the Coeur d’Alene area. 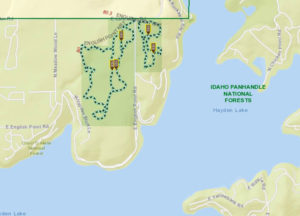 English Point is isolated from other public lands well outside the boundaries of the nearby Coeur d’Alene National Forest. Surrounded by private holdings, two sides of the parcel border the strip of development to the south and east along the Hayden Lake shore. Its western side is adjacent to residential parcels of a couple of acres and more.  Other small pieces of federally-managed land dot the valley between the Coeur d’Alene and the Selkirk Mountains. But the English Point Parcel is one of two developed for public use.

In 2006, President George W. Bush’s administration floated the idea to sell off the isolated parcels outside the national forest boundaries. [1]  English Point was on the list, and a public outcry arose. The idea quickly disappeared from the lips of even its most ardent advocates.  Clearly, the public cherished this open space. [2] Here, a leisurely hike, horseback ride, mountain bike, or winter snowshoeing is a short drive from the Coeur d’Alene Area.  In the hearts of the public, the benefit of English Point’s woods and trails far outweighs the value of the land when converted to subdivision or urban sprawl. 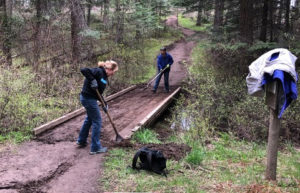 In recent years, the Idaho Trails Association and Back Country Horsemen, working with the Forest Service, have maintained the miles of trails. Through ITA trail clean-up projects, volunteers remove tread-obstacles and brush back encroaching vegetation. They remove deadfalls, clean out water bars, improve drainage, clean off the three bridges, and pick up litter.  Ordinary citizens take shovel, Pulaski, trimmers, and chainsaws in hand to maintain and improve the trails. 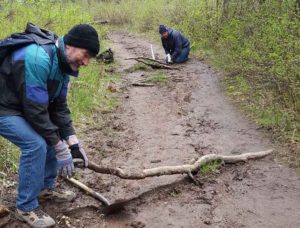 These voluntary efforts keep the trails in excellent shape.

Over the years, the forest of English Point has fallen into poor health. It is increasingly becoming a forest fire hazard.  Long-term fire suppression is responsible for much of the problem.  Without, small ground fires would have consumed brush and fallen trees, limiting fuel and thus preventing large forest fires.  They would have helped to control insect pests and provided nutrients to the surviving trees.

The first peoples of the area had a sense for the value of burning. They set fires every few years to improve the habitat of the game they hunted. [3] The large, healthy trees with thick fire-resistant bark – Ponderosa Pine, Douglas fir, and larch – weathered these fires unscathed, leaving a fairly open forest dominated by relatively few large trees per acre.  Fire suppression has allowed brush and fire-intolerant, but shade-tolerant white fir and hemlock to grow. Deadfall and litter loads have increasingly built up, raising the potential for a massive fire.  The situation is hardly unique to English Point; many places in the Coeur D’Alene and other National Forests experience the same.

In much of the forest, the Forest Service can correct this decades-long management error by periodic controlled burns.  However, at English Point, this is an approach the Forest Service dare not exercise.  Escape of a controlled burn on most of the forest is, at most, an embarrassment.  In contrast, escape of a fire at English Point into the multimillion-dollar real estate near the lake would be economically and politically devastating.

As a solution to this problem, the Forest Service is employing brushing crews on the public lands this spring.  These crews are cutting down not only the brush but the young grand fir and hemlock as well. The younger trees act as “ladder fuels,” providing a pathway for ground-fire to reach the crown. By removing these, the forest will be more open. It will be composed of larger, fire-tolerant Ponderosa Pine, Douglas fir, and larch.  In time, the shrubs will regrow to fill in the gaps.  Likewise, young trees will reseed, including the more vulnerable white fir and hemlock.  Thus, English Point will again require the relatively expensive process of brushing in another eight to ten years.

Drought no doubt weakens trees, but less so to fire than to pathogens.  The second problem of the forest stands at English Point is the high death-rate of trees due to root rot, bark beetles, and other pathogens.  These tree-killing agents are always in the woods. But as more trees decline or die, their numbers increase, inducing even higher tree mortality in turn.  The forest stands of English Point are long overdue for silvicultural treatment. If such strategies are not applied, mortality will increase, and dead trees will fall, adding to the fuel loads. All that will be required is a spark on some dry, late July or August day. The wildfire that results will not confine itself to the English Point Parcel alone.

To reduce the risk, the Forest Service will likely apply a selective cut of trees to the English Point parcel. White fir, hemlock, and weakened Douglas fir will be designated for removal.  In the areas where root rot threatens the trees, crews may create very small eighth-acre openings by logging. The wide road-like trails on the west side will permit tractor yarding of logs. On the east side where paths are narrow, the Forest Service might consider yarding with horses instead. 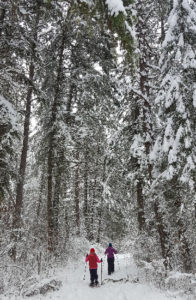 Soon, neighbors and users can expect to hear the chatter of chainsaws and the crash of falling trees in the woods.  Trail users can expect temporary closures.  Though an intrusion, this is necessary to improve the health and fire resistance of the forest on English Point.  These short-term nuisances are a small price to pay for retaining the environment of an otherwise serene, natural, wildlife habitat.  The payoff will be a natural recreational area far less likely to have a fire spill over onto adjacent owners.

References - find more on the web:

Indians, Fire, and the Land in the Pacific Northwest

How Stuff Works: How does a forest fire benefit living things?

Commentary: Idaho’s forests need us as much as we need them

More on Living on Hayden Lake, The Watershed from our BLOG: 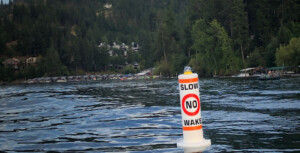 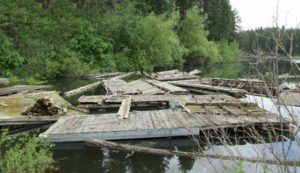