The Curly-leaf Pondweed in the North Arm has seen better days! We hope. 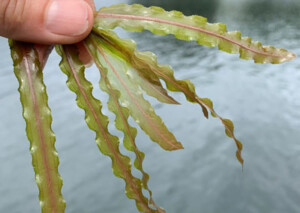 On Tuesday, May 19, Idaho State Department of Agriculture (ISDA) and the applicator Clean Lakes treated the North Arm with Galleon SC®, an aquatic herbicide, to relieve the shallow waters for ongoing Curly-leaf congestion. The treatment area extends from Sportsman’s Access south to McClean’s Bay – see the ISDA Treatment Map.

Residents on the shoreline and within a quarter-mile of the treatment received notices via certified mail and door-hangers describing the few restrictions that exist resulting from the use of this herbicide:

These prohibitions will need to be followed for at least 14 days, and most likely, 30 days.

Jeremey Varley, ISDA Noxious Weed Manager, reported that, on the day of the treatment, the Curly-leaf had grown to about 2 feet below the surface out in the deeper water away from Sportsman’s Launch. The treatment date was planned for a point in the plant’s growth at which the majority of the spring crop was in active development, but before which, the plants started to form turions. Jeremey noted that turions had not begun to develop yet, so they appear to have met their mark.

How will this year compare to last year?

Galleon (Penoxsulam) is a systemic herbicide, just as last year’s Sonar One (Fluridone). That means that the plant absorbs the herbicide, and the active ingredient moves within the plant to the site of action. Each affects a different part of the plant’s growth system. Fluridone blocks the plant’s production of its natural protection from UV light damage. Penoxsulam prevents the production of certain amino acids, which are key building blocks for normal plant growth. In either case, weeks-long exposure is needed to affect the plants beyond repair.

An important difference in this year’s application is its impact on those of us who live and recreate on Hayden Lake.  One application is needed instead of three. Once water restrictions for food-plants are lifted, we will be free to water our gardens throughout the heat of the summer. 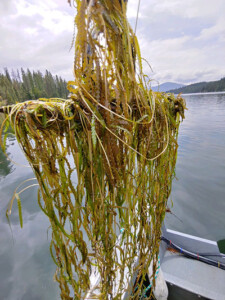 We expect that the plants will not top-out on the water.  They may continue to grow for a short time, using up their existing resources. But they won’t produce turions – those little cone-shaped seedpods that turn into next season’s crop. As they die, they will lose their color and rigidity. They will drop to the bottom of the lake and decay. We don’t expect mats of dead weeds that have to be pulled up onto the shore. And we don’t expect fragmentation that will lead to spread and re-planting of the weed. You will see Curlyleaf Pondweed fade away and leave the lake in its normal timeframe, around mid-July. But, if the treatment works as predicted, you won’t see as many fresh new sprouts peeking out of the ground in the fall.

And that’s ISDA’s mission which we’ve grown to understand and embrace: to affect a long-term reduction in the plant population to the point where it’s manageable without broad applications of herbicides.

In the Mean Time

The first residue test will take place Friday, 5/21/20, with results expected around the 26th. This text will confirm that the application provided the calculated dose of herbicide. The second test will be 14 days later, checking to be sure the plants have had adequate exposure time. And the third test will take place 30 days from the treatment day. The results will confirm that the Penoxsulam is out of the system, and water restrictions are lifted.  We will post results at the top of this page. The applicator, Clean Lakes, will also post results at http://www.cleanlake.com/2020haydenlake1.html.