The City of Hayden plans to build a new, permanent facility to house the Sheriff’s Marine Division boat on Hayden Lake.

The impact of wakes on Hayden Lake continues to be a concern for many. It grows in concert with the growth of wake-producing recreation.  Citizens hoping to reduce the pounding of the waves often call for an increase in police presence. In their estimation, marine patrols would give teeth to Kootenai County’s 300-ft no-excessive-wake regulation. Sheriff’s deputies concede that, when they’re there, people follow the rules better than when they’re not. But the Marine Deputies have only so many minutes in their day. The new Marine facility will enable them to spend fewer of those minutes in traffic and more of them on the water.

For the 2021 season, the Kootenai County Sheriff’s Office recognized the need and increased their Hayden Lake patrolling hours beyond previous years. Before receding water levels discouraged surfing and skiing, residents noticed the Sheriff stopping boaters on the water. They attributed lower boat traffic and more careful drivers to the Deputies’ work. Still, others reported that some boaters continued to disregard the proximity of the shoreline. 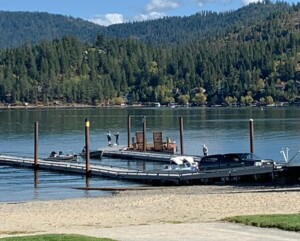 In future seasons, all will benefit from the increased support that comes with a permanent home for the Sheriff’s boat. The City of Hayden will contribute public safety impact funds to build an extension onto the southern dock at the Honeysuckle boat launch, according to City Administrator Brett Boyer. A covered, one-boat slip will be angled a bit toward the south, out of the normal flow of traffic. And, just like that, the Sheriff will no longer have to wait in line to launch their boat. They will dramatically reduce response time to needs on the lake. And the boating public will have that little extra reminder to motor safely and responsibly according to Kootenai County regulations.

Grateful to the City of Hayden

The Hayden Lake Watershed Improvement District and the Association have, for years, sought to locate a site that would meet all the Sheriff’s needs: quick and easy road access, parking, security, a place to build a cover, and unrestricted water access to the most populated parts of the lake. Homeowners have offered their support, but no options emerged that would check all the boxes. Both organizations are grateful to the City of Hayden, who will meet the Sheriff’s needs and reap the benefit of improved security and support for citizens recreating along the Honeysuckle Beach and boat launch areas.